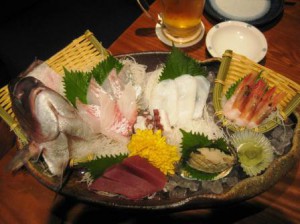 In 2014 I went to a concert at an English pub in Tokyo with my teacher’s son-in-law, son-in-law’s English teacher and his Japanese girlfriend.
It was the coolest concert with a Japanese / British band and while we drank cold beer on the very hot summer evening, it embedded with Europeans living in Tokyo. It was a pretty fun experience.

At about 11 p.m. we had to go back because the metrologists had announced that there would be a typhoon coming later in that evening. Before the son-in-law and I had to go home we would have a little night food on the road. It turned out to be the wonderful sashimi dinner we had served at 11.30 p.m.
We reached home before typhoon hit Tokyo the rain poured down at that time.