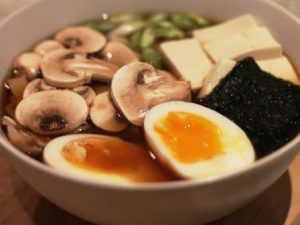 In Japan, Japanese cuisine is very large.
There are as many different styles as the whole of European cuisine combined.

Most people will probably think that sushi is at least as popular in Japan as in Europe. That is not the case.
The Japanese love sushi, sushi makes up less than 15% of Japanese cuisine. Sushi is not a dish that the Japanese choose on a busy day after work.

On a busy weekday, the Japanese prefer ramen soup. The Japanese are the population in the world that eats the most noodles.

In Japan, there are a many different kinds of tasty noodle soups, they are found in all shades.
In Denmark and in the rest of the world, most people know ramen noodle soup.

Some noodle soups are as different as day and night. It’s just like the two noodle soups, you learn step by step on Noodle soup course for beginners. Ramen is, of course, one of them.