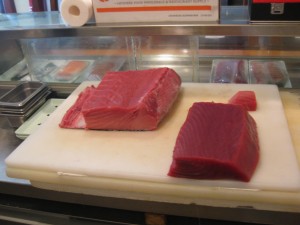 In Japan, sushi restaurants have several different kinds of tuna on the menu. In Japan, fish is the main source of protein and fish oil. During a week, the Japanese eat a lot of fish. They eat as much fish as meat is eaten in Europe.

Like so many others, the Japanese are happy to be able to choose from several different fish. One of the fish that stands out is the tuna. The meat on the tuna tastes very different depending on where it sits on the fish. Tuna from the stomach is called toro, it is fat light pink tuna and, is an exclusive eat.
Low-fat tuna which is bright red in color is called Akami, it sits at the spine. That piece is used for sashimi and nigiri pieces. That way, the meat pieces can be prepared and eaten in different ways.

The reason why sushi restaurants in Japan have several different pieces of tuna to choose from is that most of the tuna in the world lands at the Tsukiji fish market in Tokyo, which is the largest in the world.