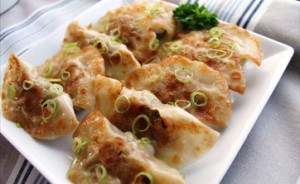 The Japanese dumplings also called gyoza comes original from China.
China is known for its wide variety of delicate and tasty dumplings which are available in many different sizes, taste and flavors.
Gyoza was introduced in Japan in the 1940s. During World War II the Japanese invaded China. During the invation the Japanese learned how to make dumplings and brought it to Japan.

Since then Chinese dumplings has been adapted to Japanese cuisine so it has the classic Japanese aromas and flavors. In Japan you can only get one kind of Japanese dumplings which is a very popular dish in Japan.

Dumplings is a dish that serves as a snack or a starter for Japanese dinner parties.

On the course Traditional Japanese cooking class for beginners you learn how to make delicate and tasteful gyoza as they are served in Japan.