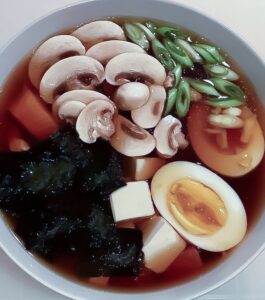 There is a big difference in the type of noodles used in Japanese noodle soups.
Most people have heard of ramen soup, where one type of noodles is used. They are long, thin, and yellow and look like spaghetti, however, the texture and taste is different.

Ramen soup is not the only soup that the Japanese eat all year round.
In Japan, several different types of noodle soups are eaten, some at certain times of the year.
Overall, it is the noodle soup’s foundation, vegetables and meat/fish that determine which type of noodles are used.

In some soups, noodles are used that are neutral in flavor like udon; it is the soup itself that has a lot of taste and aromas. In other soups, noodles that have a little taste like ramen are used because it adds an extra dimension of flavor to the noodle soup.

In the Japanese noodle soup course for beginners, you will learn step by step how to make 2 very different tasty noodle soups.

The hot summer days are coming to an end and we are approaching autumn.
Autumn is a changeable time reminiscent of a bag of mixed sweets, sun, wind and rain and sometimes on the same day.

Autumn is one of the most beautiful seasons.
Nature and forests show themselves from their most beautiful side. The forest abounds with mushrooms and just around the corner awaits the classic root vegetables.

A classic Japanese noodle soup contains fish, meat, noodles, vegetables and seaweed in other words it is one of the healthiest fast foods on a busy day.

In the Noodle soup course for beginners, you will learn how to make tasty soups from scratch with Japanese noodles, soups that have the same unique aromas and flavors as if served in restaurants in Japan.