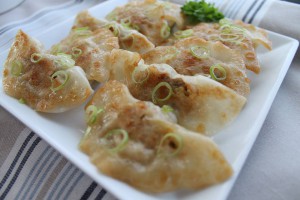 The Japanese cuisine is influenced by neighboring countries such as Korea and China. 100 years ago Chinese dishes were introduced in Japan, and then adapted to the Japanese taste.

Therefore, you will find Gyoza on the Japanese menu which is Japan’s version of Chinese dumplings. Gyoza is extremely popular dish which is often served as a small starter.