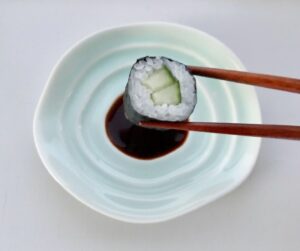 Yes, it is true. In Japan, soy sauce is considered a spice.

Before I was trained as a sushi chef, I did not know much about soy sauce. I did not know what the difference between soy sauce produced in China, Korea and Japan was.
I had one soy sauce in my kitchen that I used for all types of dishes from wok dishes for spring rolls.

Back in 2006 while becoming a Japanese Sushi Chef, I quickly found out that it does matter which soy sauce is used in dishes from the classic Japanese cuisine or for sushi.

In Japan, soy sauce is the main spice it is a way to season the food. If you use a soy sauce for tempura which is too salt, you will not be able to taste the food. It does matter which soy sauce is used for different dishes.

In Tokyo, if you visit a Japanese supermarket you will quickly discover that there are as many different soy sauce as cheese in a Danish supermarket.

At the Sushi course for beginners, you learn, among other things which soy sauce is best suited for sushi in order that you get the most value for your money and at the dinner table.