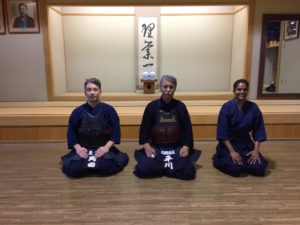 In summer 2017 I was in Tokyo and I had an appointment with my teacher that I should have some kata practice.

I had to be dressed and be ready for training at. 6.00 am. When you have an appointment with my teacher, you will NOT be late unless you have been run over by a bus.

I showed up at the address and couldn’t get through the grid gate to Noma dojo. The Noma dojo was built in 1925 and it is the most famous kendo dojo in Japan and, to train, one must be invited.

Next to the building is a police station. All police officers in Japan practice kendo it is part of their job. Some of the best kendo athletes in the world are police officers. I went in there and explained to the officer who did not speak English that I was going to Noma dojo to practice.

He went along to the grid gate. I show him my teacher’s business card and point to the gate. He called spoke to a woman lady and, shortly after, the gate was opened. He points out which way to go.

During my stay I practiced a few times in Noma dojo. For me, training in such a beautiful and historic kendo dojo is a great experience.

The photo shows my teacher Hirakawa sensei (older gentleman) and a colleague Okada sensei that is very famous in Japan.