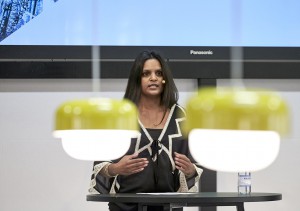 To whom is the personal sparring for?

Sparring ‘How to reach your goals’ 1:1 is for those who want to discuss their specific challenge in several different ways in order to find the best solution.

About the personal sparring

In the Eastern world, people focus on the whole person, where there should preferably be a balance between body and mind to be able to be in flow.
Through the Japanese martial arts of kendo, Zoë has learned the tools needed to create lasting results.

Based on your life we will turn and twist problem in several different ways so that you find the best solution that best suits your life.
In that way you will become more confidence and sure about what your next step should be and how to get to closer to the goal.

You will do the sparring with sushi chef & Sake Sommelier Zoë Escher who has many years of performance experience.

Since 2001, I have worked with performance in different contexts.
I have practiced the Japanese martial arts of kendo at elite level, a martial art that led me to Japan on a training camp. I have trained at the best kendo club in Tokyo and at the prestigious university Tokai Tokyo where the most talented athletes practice.
I have been taught by some of the best kendo instructors in the world, and I have participated in some of the biggest tournaments in Europe.

In 2006, I became a sushi chef and Sake Sommelier at the California Sushi Academy.
The course was led by the highly acclaimed Japanese director Toshi Sugiura, who is also a celebrity chef in Hollywood and a judge at sushi competitions in Japan. During my stay in Los Angeles, I made catering at celebrities’ houses in Bel Air, Beverly Hills, and Brentwood, as well as at film companies in Hollywood.

Zoë has obtained the following result

In February 2016 I held the official opening speech and opened the fair Formland Spring 2016 in Messecenter Herning in Denmark. At the opening of the fair there were 49 people from the press, 20 VIP and 271 exhibitors.
Rated in 2013 as Denmark’s sushi expert no. 1 by gourmet supermarket chain Irma.
Nominated for the Danish Experience Prize 2013.
Achieved a financial growth in her business of 75 to 150 per cent per year during the financial crisis.

The course can also be held abroad. If you are interested in getting sparring or have questions please send an email to info@sakana.dk