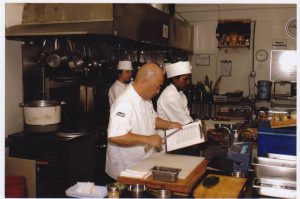 I just found an old picture from the 2006 from California Sushi Academy and a picture taken last month. Toshi still were his glasses in his forehead.
In 2006, we were all terrified every 14 days because our sushi skills were tested. Toshi is also a judge at sushi competitions in Japan and he is very tough as a judge.

Such a skill test consisted of fillet mackerel, sahimi, nigiri test, sushi roll test and presentation. Not only did he test our skills he also took time on how long we were about to make the food.

Thank god, I became No. 2 in the final and crucial skill test.

A lot has happened since then and today I am not dying of fear.

As a sushi chef Bar Hayama is the restaurant I know best. In 2006 I was trained to become a sushi chef at California Sushi Academy. Next to the culinary school were Toshi’s sushi restaurant where we worked in the sushi bar and did catering.

In 2012, I was back in LA where my teacher Toshi introduced me to a nigiri technique that takes 20 years of master.

There is a big difference between whether you are trained by Japanese sushi chefs or trained in Denmark.

Last night there were several Japanese sushi chefs inside and outside the sushi bar. I get the most out of talking about sushi with Japanese trained sushi chefs.

This Friday night I will be back in the sushi bar in Los Angeles. It is going to be great I learn a lot from Mino a Japanese sushi chef with 36 years of experience.

Emmy’s Awards are being presented this Sunday it is not be boring in LA this weekend.

As most people know I was educated as a Japanese sushi chef back in 2006.

In 2012 I traveled to LA, where I was introduced to a nigiri technique that takes 20 years to master.

Now it is time. In September I will travel to LA for almost 3 weeks and I am so happy. My sushi chef teaches aka Executive sushi chef is in LA during the time I am there. It is so fantastic because I get the opportunity to expand my horizon.

My stay in LA will be very interesting as in that month also the Emmy Awards will be held. I look forward to some interesting events. 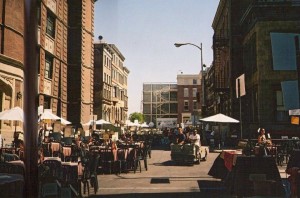 With all that is going on in the world at the moment I would like to pause on a fun moment in Los Angeles. The picture was taken in 2006 on the film scenes at the movie company Paramount Pictures in Hollywood.
We made lots of sushi in one of the”street” at a charity event where 5000 prominent guests were invited.